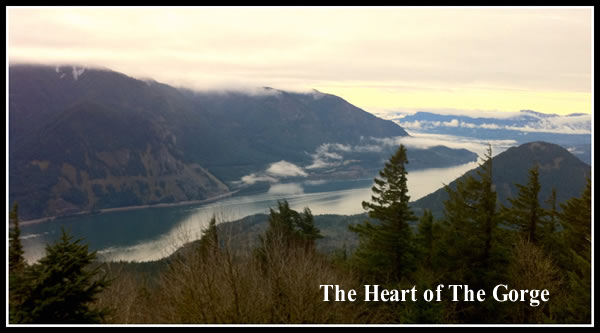 A Brief Introduction: The Town of Hood River, Oregon, lay on the banks of the mighty Columbia River, deep in the heart of the scenic, Columbia River Gorge.

Few other places in the Pacific Northwest display such a vivid reminder of the vitality and the awesome power inherent in the moods of Mother Nature. Here, your senses need no encouragement. A gaze can, at such short notice, leave you agape; simply humbled by the expanse of her drama or the charm of her intricacies.

At close to 80 miles in length, The Columbia River Gorge wraps her tall arms around the Columbia as she nears her rendezvous with the Pacific Ocean. The Columbia is not your typical river. She is the mother of all western rivers, serving as a conduit for much of the drainage that spills off our continent. Here in The Gorge, she runs large much like an artery might, after gathering so many vessels up into her breast. She is the centerpiece - the main street. It is not surprising that her pulse beats strong, echoing her songs of life and journeys between the surrounding columns of rock 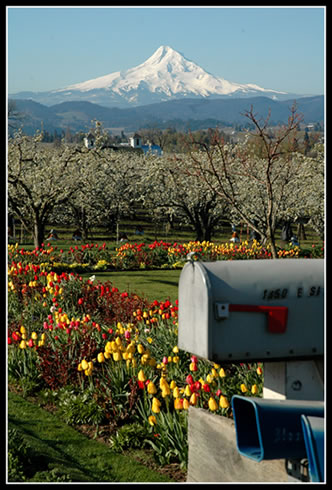 Long before the first automobile, let’s say about 15,000 years ago, The Gorge began to take shape through a series of gigantic floods. When the vast North American ice sheet started to recede, the water started to flow. Rivers and lakes were formed. One lake in particular grew broad and deep in the landscape around Missoula, Montana. The lake continued to grow until one day, her building pressure could not be held any longer. The dam of ice, holding back the impending flow, gave way, sending a wall of water surging towards The Pacific. This was the first surge in what would later become known as the Missoula Floods. These massive pulses of water, moving at speeds up to 80 miles per hour, carved out the dramatic canyon we see today.

Over the years, The Columbia River Gorge played host to many indigenous tribes of people. Numbering in the millions, Pacific Salmon and Steelhead runs up the river provided a valuable food source for people camped along her banks. Celilo Falls, now buried beneath the backwater behind The Dalles Dam was the most coveted fishing grounds in the area. Located halfway between The Dalles and the mouth of the Deschutes River to the east, lay the largest drop in series of cascading falls on the river. Tribes from all over the Pacific Northwest made the annual pilgrimage to these rich fishing grounds in hopes that their spear would find fish in the tumultuous flows below the falls. She is gone now, asleep in the depths of the Columbia.

The Columbia has always remained a busy transportation route. Years after the Lewis and Clark Expedition floated down the Columbia in 1805, wagon trains started to drop settlers into The Gorge in the 1840’s. Settlers used the river as a viable trade and supply route. Steamboat companies emerged and remained a practicable connection between Portland and settlements in the Gorge. There were however, a few rapids that were impassible for steamboats wishing to travel up the Columbia. The first lay at Cascade Locks, so in 1896, a set of locks were completed around the falls that made the act of portaging a thing of the past (These became obsolete with the construction of the Bonneville Dam in 1938). Also in place by the year 1883, was a completed railroad on the Washington side of the river. The Northern Pacific provided the first through-way rail line from Portland to St Paul Minnesota. 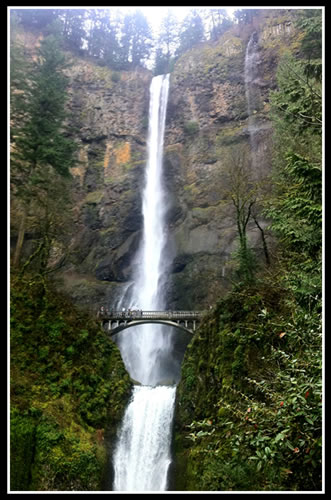 The first scenic roadway was completed along this section of the Columbia in 1922. It was promoted by a man named Sam Hill, who was a very wealthy, adventurous entrepreneur. Due to his raunchy and excitable demeanor, we can add the popular term "What in the Sam Hill is …” to his list of accomplishments! So with Sam to thank, people fueled up their model T’s and ventured along the twists and turns of highway 30 into the heart of The Gorge. It became a tourism destination. People flocked to witness the vistas and the numerous waterfalls cascading from the canyon rim.

Inns popped up and commerce flourished along the canyon. Commercial fishing was an extremely viable occupation and canneries thrived along the river banks to quickly ready the catch for export.

These were bustling times for The Gorge, remembered as a time of growth and prosperity. However, as is often the case with full ahead industrialization, there were consequences. Many of which were shouldered by the river and her myriad, natural inhabitants.

The first of the Columbia River dams was completed in 1938. Built by the Army Corps of Engineers, The Bonneville Dam was constructed in order to bolster power generation, transportation and flood control. Also at the east end of The Gorge, The Dalles Dam was completed in 1957. Both of these dams were built with fish ladders which would make passage possible for migrating fish. This was just the start of the Hydro projects along the waterway, but almost immediately, the effects of dwindling fish stocks became realized.

Columbia River Salmon and Steelhead stocks began to crumble from the combination of these concrete barriers and widespread overfishing. No longer would these runs be measured in the millions and authorities scrambled to create fish to mitigate for the losses. Fish Hatcheries, to this day, remain a large part of the federal budget in order to compensate commercial fisheries, sport fisheries and Native American’s who lived on the flesh of salmon for thousands of years. It is a battle that still rages on today, as most Columbia River stocks are listed under the Endangered Species Act. Much of the fight hinges on the creation of hatchery fish and the amount of minimal flow over the dams during critical, juvenile fish migration. There is even a fight happening to tear down four critical dams that are located further upstream on the Snake River.

Although runs are not what they used to be, sport fishing continues to be a popular activity on the Columbia and her tributaries throughout The Gorge. Rivers such as The Deschutes, The John Day, The Klickitat, The Sandy and The Hood provide some fantastic opportunities for Steelhead and Salmon fishing. Area lakes and creeks play host to some fine trout populations and in the Columbia, most species can be found as well as over-sized sturgeon which can live up to a hundred years old and be over 10 feet in length! 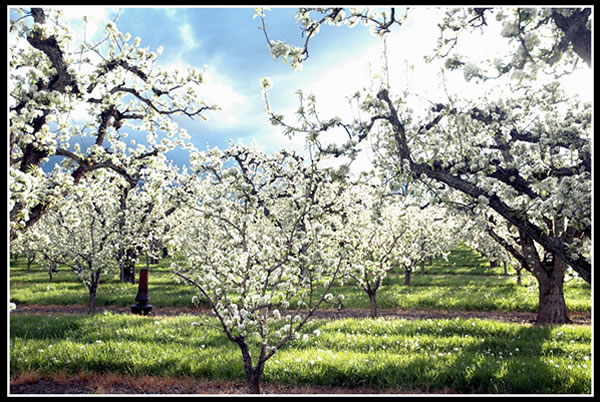 Located about 70 miles from Portland, the quant town of Hood River is a wonderful jumping off point for many sites and attractions in The Gorge. Located on the banks of The Columbia and at the bottom of the fertile Hood River Valley, she possesses a charming town center that is fraught with shops and great dining. She is also the proud home of the Gorge Fly Shop, which has been servicing fly fisherman for over twenty years!

Many people have come to know Hood River as a hub for progressive wind sports. Windsurfing planted its roots here in the early 80’s as folks recognized the near-perfect attributes of the area. During the summer months, The Gorge becomes a natural wind tunnel. Hot, rising air over the desert to the east acts as a vacuum, pulling cooler, maritime air through the canyon. The result is a steady, and often blustery, breeze that is especially strong around Hood River where The Gorge is at its narrowest. In recent years Kite Boarding has become a very popular alternative, offering adrenaline searchers a new method of raising the heart beat. Many classes are available in the area that provide friendly and certified instruction. It is not uncommon to see hundreds of kites dancing across the Columbia on a warm summer day!

Aside from fishing and windsurfing, Hood River offers visitors some great hiking and biking opportunities. Many people resolve to finish off a hike by relaxing with a view and a glass at one of the area’s many wineries. Others elect to tour Hood River Valley’s many fruit orchards - after all, the fertile lands here make Hood River the world’s leading producer of Anjou Pears!

It is a place where dreams find consciousness…

'Fly Fish the World with Us"