Understanding Sink Tips, And How to Use Them

Our Products: Travel > Travel Articles > Understanding Sink Tips, And How to Use Them

Disclaimer: When it comes to choosing a sink tip, the right one (Captain Obvious) is the one that gets the job done, the one that will turn your fly over easily and get you down to the depths needed to bring you success in your given situation. That could mean using a tip that doesn’t match up with the chart listed below or scenarios listed below. Be ready to experiment by adapting or thinking outside the box. The information listed below is not gospel when choosing tips, however it is a great general guideline and starting point.

We were talking in the shop the other day and the conversation mainly focused on all the different floating and sink tips now available to us whether you’re spey fishing, trout spey fishing or fishing a single handed rod with a Skagit style head. A literal boat ton of articles have been written over the years regarding the what, where and when of sink tips. There is no shortage of information about the subject out there. Dare I say maybe too much info that it becomes confusing.

Each manufacturer has “their” versions of tips that they have designed and recommend using with “their” Skagit and Scandi lines and this can take some of the guesswork out of trying to figure it all out. The convenience of buying the tips from the same manufacturer as the heads you’re using makes perfect sense, I mean they built them to marry each other, so it seems easy enough.

The question is, and the reason for our conversation in the first place, was can I use a RIO MOW tip on an OPST Commando head or can I use an OPST sink tip on an Airflo Skagit Scout head? The quick, short answer is: Yes!

No doubt you’ve heard the term “mass moves mass” so think about this when choosing the right sink tip. Most folks typically think about their sink tip in relation to how deep they want to get their fly and this is true, but an equally important thing to think about is the fly size you’re trying to cast.

This is where the term “mass moves mass” becomes very important. An example would be if you were using a 600 grain Skagit head and throwing a big weighted intruder, you typically wouldn’t want to use a RIO MOW Tip Light 10’ T-8 tip for instance. Too much mass in the skagit head, and then the heavy weight of the intruder fly with too little mass in between in the sink tip, would make for a poor casting combination. The fly wouldn’t turn over as well in this case.

Manufacturers put out charts with general suggestions to which sink tips to use with their Skagit and Scandi heads. In this particular instance I am using RIO’s as an example.

RIO states that this is a “general rule” list for matching Sinking/Floating tips to head grain weights, which can cross over to other manufacturer’s as well. The idea is the same no matter who makes the tips and is more of a “guideline” for us as anglers.

Below is an excerpt of this list created by the folks at RIO.

There are many different types of sink tip on the market; here is a guideline of when to use which. The following guideline is a good place to start. However, anglers should vary their tip size and take into account fly size (heavier fly, heavier tip) and water/weather conditions.

**NOTE:The 10’ and 15’ tips listed in the graph below are the RIO InTouch Replacement Tips. 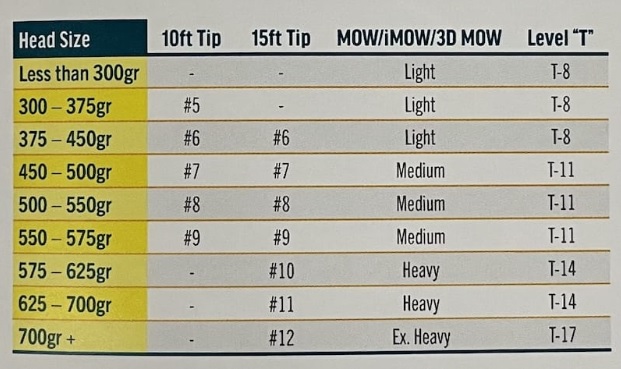 So, what can we do with this graph and its information? We can begin to understand that these are more like “guidelines” and not necessarily cast in stone. Meaning for instance, If I am throwing an OPST Commando 350 grain head and they recommend that I use their Commando 10’ 80 grain or 12’ 96 grain sink tip, but I don’t have them…I can use as a substitute a 10’ RIO MOW Light T-8 (80gr) tip or the 12.5’ T-8 (100 grain) tip.

When it comes to floating tips, it's very similar in that, if OPST says use a 10’ 75 grain floating salmon and steelhead tip with your 250-425 grain head, but you don’t have that tip, you can easily substitute a RIO MOW Light 10’ 90 grain or better yet the InTouch RIO Replacement 10’ #7 Floating tip at 75 grains. Either one of the floating tips will work, even though one is a few grains heavier.

As O.P.S.T. (Olympic Peninsula Skagit Tactics) even states on their recommendation chart for heads and tips: NOTE - “These are recommendations only and as in real life gray areas do exist.”

Once you understand the fundamentals of tips and which to use and when, it becomes easier to mix and match and adapt with what you may already have or what is in stock at your favorite fly shop (Gorge Fly Shop). Be willing to improvise to get the job done so to speak.

It’s easy to “geek out” when it comes to sink tip length and grain weights and I get it, if you are into that, I mean no offense. I am very thankful for those who have “geeked out” and thus created the modern day tips. I am super thankful for those folks. But at the same time, I’m not one to geek out, I just get to reap the benefits of those who do. I just want the tip to do what I need it to do successfully. Having a basic understanding of the tips is very beneficial without it being so complicated as we can sometimes make it.

Tungsten sink tips are measured in grains, which is a unit of measure, and generally are decided based on how many grains there are per foot. An example, T-8 (or Tungsten 8) has 8 grains per foot, if you have a 10ft tip at 8 grains per foot the total tip weight equals 80 grains. Same for a T-7, T-10, T-11, or T-whatever tip.

As you can see in the list below the slight differences, if you can call it that, between manufacturers can be seen. They may call it something different but essentially they are the same thing. An example would be a 12.5’ T-14 tip doesn’t sink faster than a 10’ T-14 tip, the sink rate is the same, even though the 12.5’ tip weighs 28 grains heavier. It will sink deeper because of the extra length of the tip but not faster because of the extra grain weight.

OPST sink tips come in a variety of grain weights and lengths, designated as Riffe, Run or Bucket in each of those grain weight families. Ideally these tips work best in the areas they are named after, fish a Riffle tip in the riffle, the Run in the main run, and the Bucket in the deepest parts of the pool.

Where it gets confusing to some folks is that within a given grain weight folks think that the Riffle is the T-8, the Run is the T-11 and the Bucket is the T-14. This is not the case. In any given grain weight, the bucket option of the three tips is the closest to the T-whatever tip classification. Even though the slower sinking tips have the T-whatever in them, they are thicker and sink at a slower rate than the Bucket version. In other words the Bucket tip of the 80 gr 10’ tip is T-8. So, what about the Riffle and the Run tips, those are labeled as T-8? Which is true, however the Riffle tip is thicker than the Run tip, and the Run tip is thicker than the Bucket tip. Because of this the resistance is greater in the Riffle and Run tips and causes them to sink at slower rates than the Bucket tip. Hope I made sense there.

Below is a basic list of the types of tips to use with the types of line set ups you’re using (use the RIO diagram above as a guideline, but don’t be afraid to mix it up):

Skagit Heads: - Designed to throw sink tips and heavier flies: Anyone of these tips will accommodate your Skagit head and your needs at the moment. All you need to do is match the length and grain weight to your head and go for it.

Of all the sink tips, I typically use the following three tips the majority of time because they cover the majority of the situations and conditions I would encounter. These happen to be RIO MOW Tips, however, I carry other manufacturers' tips as well and if I forget one or one is damaged, I will use their version.

If I feel I need to get a little deeper I would put a heavier fly on and a longer leader, or I will adjust my cast more upstream with an extra mend or two to give the tip and fly a few extra seconds to sink deeper. Vice versa if I feel like I am getting too deep, I can adjust my cast more downstream and bring the fly into tension quicker to keep the tip and fly from sinking too deep. This method has served me quite well over the years.

One thing I’d like to mention is that when the water conditions are high I will use a lighter (sinks less) sink tip most often. Typically fish in these conditions aren’t out in the middle of the river in the heavy current; they are typically in the soft inside edges and sometimes right against the bank. So I need a tip that doesn’t sink as deep and will fish into those soft edges without hanging up before it gets there.

A go to set up in this instance for me would be for example a RIO MOW Light Tip 2.5’ Float/7.5’ T-8 or a 5’ Float/5’ T-8 or the OPST Riffle or Run version of their 10’ 80gr tip and a fly such as the HohBo Spey. An excellent unweighted fly with a big profile that will swing all the way into the bank, and it puts steelhead to hand!

It’s important to understand how sink tips work and that these recommendations are more guidelines rather than a few hard cast in stone rules when it comes to making a tip selection for any given situation. Generally speaking, the longer the rod, the longer the tip you would typically want to use. However there are exceptions of course.